Very good. We learned a lot and have much fun. Guide has deep knowledge, very good attitude and energy.

Quality services with a reasonable price. Provide a clear information on time and reliable.

Upon arrival at Siem Reap international airport, you will transfer by drive and tour guide and then transfer you to hotel for check in.

Breakfast at hotel In the morning, we travel through the traditional village of Preah Dak to the 12th century temple of Banteay Samre. Built by King Suryavarman II, the genius behind Angkor Wat, this temple has been extensively restored. The temple is unique in that over-quarrying of sandstone led to the use of laterite for the roofed corridors. The pediments above the inner doors here include some of the most accomplished carving from the Angkor period. We continue further north to Banteay Srei, Angkor’s ultimate art gallery. This petite pink temple is the jewel in the crown of Angkor-era sculpture. The elaborate carvings here are the finest found in Cambodia and the name translates as ‘Fortress of the Women’, thanks to the intricate detail here, considered too fine for the hands of a man. Originally believed to date from the latter part of the Angkor period, inscriptions at the site suggest it was built by a Brahman in 967. However, some architectural historians have suggested that the inscriptions may date from an earlier structure on this site and the temple is in fact later, marking a high-water mark in Khmer sculpture. This afternoon, we travel to the mighty temple of Preah Khan or 'Sacred Sword', built by King Jayavarman VII in the late 12th century. Sister temple to Ta Prohm, the cruciform corridors here are impressive and there are some wonderful carvings adorning the walls, including the spectacular hall of dancers. Look out for the curious two-storey structure that is almost Grecian in inspiration. This is one of the few temples originally dedicated to Buddhism and Hinduism. The original eastern entrance was for Mahayana Buddhists, while the other cardinal points represented the Hindu trinity of Shiva, Vishnu and Brahma. We then continue on to the elegant curves of Neak Poan. This petite temple is the ultimate ornamental fountain, its series of elaborate spouts including the heads of lions and elephants. Originally Neak Poan was on an island at the centre of vast baray (reservoir), known as Jayatataka or reservoir of Jaya. We journey to the mountain temple of Phnom Bakheng to see the sunset cast its soft light over Angkor Wat. A winding path cuts through the jungle or there is the option of an elephant ride to the summit. This temple is the signature spot for sunset, so it can get very crowded. Please advise the guide if you want to experience sunset at a quieter location. Read more

Breakfast at hotel We travel to Ta Prom which has been abandoned to the elements, a reminder that while empires rise and fall, the riotous power of nature marches on, oblivious to the dramas of human history. Left as it was ‘discovered’ by French explorer Henri Mouhout in 1860, the tentacle-like tree roots here are slowly strangling the surviving stones, man first conquering nature to create, nature later conquering man to destroy. After soaking up the unique atmosphere of Ta Prohm, we continue to the giant pyramid of Takeo, one of the highest temples in the Angkor area. Built at the end of the 10th century, it was never completed. Some scholars contend this was due to an inauspicious lightning strike during construction. Others have suggested the high quality sandstone was simply too hard to carve in detail. This morning we also visit the remains of an old Angkorian bridge which once spanned the Siem Reap river. Like the Romans before them, the Khmer kings built long, straight roads connecting the outposts of their empire and these included many magnificent bridges. There is also the option to visit the smaller temples of Chau Sey Devada and Thommanon for avid temple enthusiasts. In the afternoon, we visit the immense walled city Angkor Thom that was the masterpiece of King Jayavarman VII. Following the occupation of Angkor by the Chams from 1177 to 1181, the new king decided to build an impregnable fortress at the heart of his empire. The scale is simply staggering and we are immediately overwhelmed by the audacity of Jayavarman on arrival at the city’s gates. The causeway is lined by an intricate bridge depicting the Churning of the Ocean of Milk from Hindu mythology in which the devas (gods) and asuras (devils) play tug of war with a naga (seven-headed serpent) to obtain the elixir of immortality. We begin our visit at the Terrace of the Leper King. This intricately carved platform was the royal crematorium and the statue that was originally thought to be the leper king is now believed to be Yama, the god of death. We continue along the Terrace of Elephants, originally used as a viewing gallery for the king to preside over parades, performances and traditional sports. At the southern end lies the Baphuon, once of the most beautiful temples at Angkor, dating from the reign of Uditayavarman 1 in the 11th century. It has undergone a massive renovation by the French and is now once again open for viewing. Our climax is the enigmatic and enchanting temple of the Bayon. At the exact centre of Angkor Thom, this is an eccentric expression of the creative genius and inflated ego of Cambodia’s most celebrated king. Its 54 towers are each topped off with the four faces of Avalokiteshvara (Buddha of Compassion), which bear more than a passing resemblance to the king himself. These colossal heads stare down from every side, exuding power and control with a hint of compassion, just the mix required to keep a hold on such a vast empire. Before clambering upwards, we unravel the mysteries of the bas-reliefs, with their intricate scenes of ancient battles against the Chams and their snapshot of daily life during the Angkor period. Read more

Rising at the crack of dawn, we journey out to the Mother of all temples, Angkor Wat. Believed to be the world's largest religious building, this temple is the perfect fusion of symbolism and symmetry and a source of pride and strength to all Khmers. Built in the 12th century by King Suryavarman II, this is most famous temple at Angkor. We stay at Angkor Wat to enjoy a picnic breakfast. As the crowds return to their hotels, we venture into Angkor Wat to enjoy its magnificence in peace and quiet. We begin by unravelling the mysteries of the bas-reliefs that tell of tales from Hindu mythology and of the glories of the Khmer empire. Stretching for almost one kilometre, these intricate carvings are a candidate for the world’s longest unbroken piece of art. Following in the footsteps of the devout and the destructive before us, we then continue to the upper levels of the inner sanctuary. The final steps to the upper terrace of Angkor are the steepest of all, as pilgrims of old were to stoop on their pilgrimage to encounter the Gods. Finally the pinnacle, the sacred heart of Angkor Wat, a blend of spirituality and symmetry so perfect that few moments will measure up. Taking a break from the temples, we travel out to the mighty Tonle Sap Lake to visit the floating village of Chong Kneas. Nestled under the hill of Phnom Krom, this floating community moves location with the waters of the lake. During the wet season when the lake swells to five times its size, the village is near Phnom Krom, but during the dry season, it moves as much as 4km from the hill. Everything floats on water in this living fishing community. There are floating schools, floating shops, floating petrol stations, even floating karaoke bars. Many of the houses are floating fish farms with large pens of fish underneath. For those that are interested, we can also make a stop at the Gecko Environment Centre to learn more about lake, which is like the heartbeat of Cambodia, providing sustenance to millions of Khmers. Read more

Very good. We learned a lot and have much fun. Guide has deep knowledge, very good attitude and energy.

Very good quality of service. Guide was friendly and knowledgeable. He was willing and able to answer all our questions. Great driver. We felt very safe while he brought us to our locations. Great Tour :)

Quality services with a reasonable price. Provide a clear information on time and reliable. 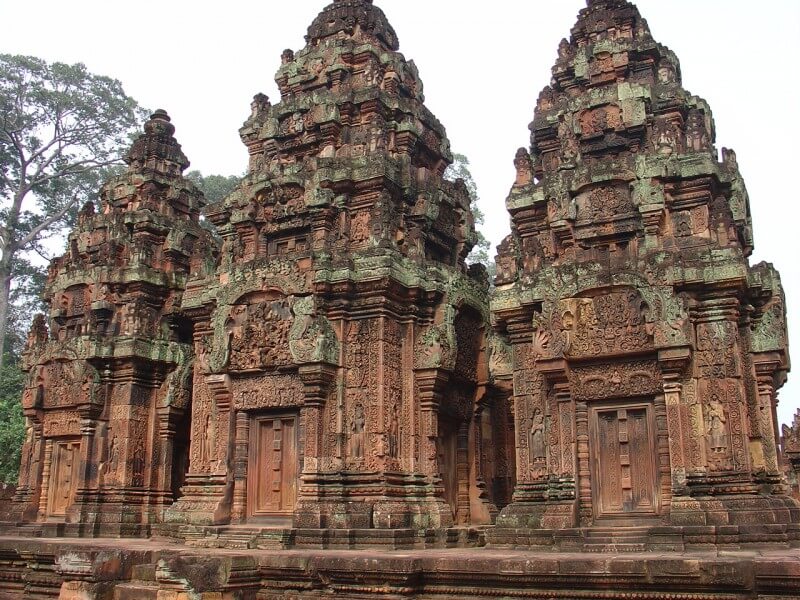 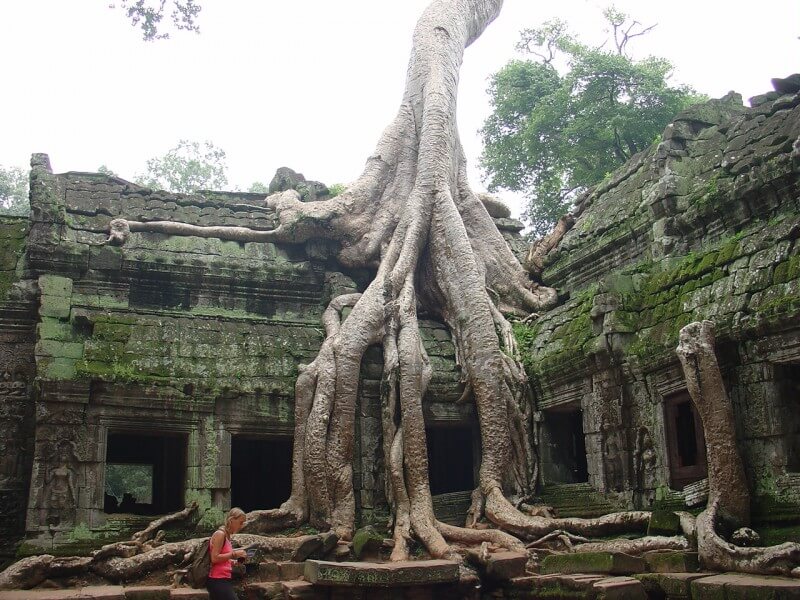 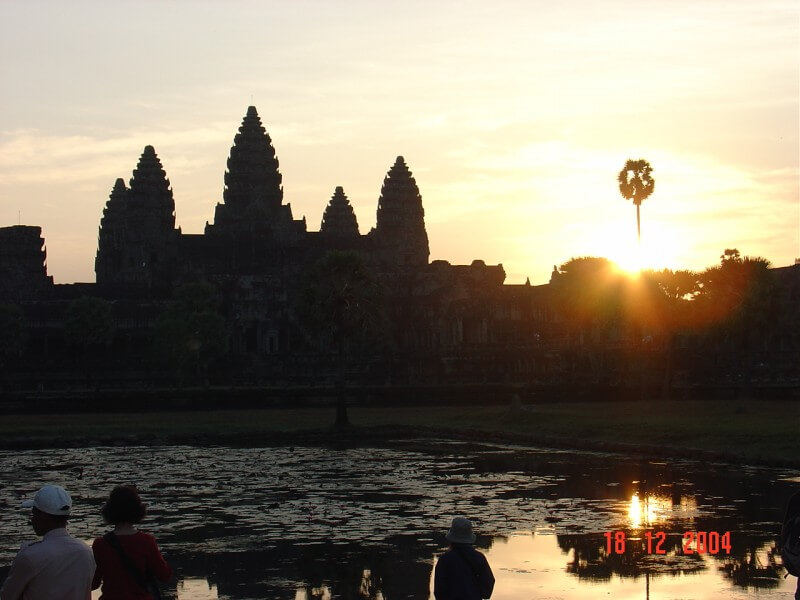 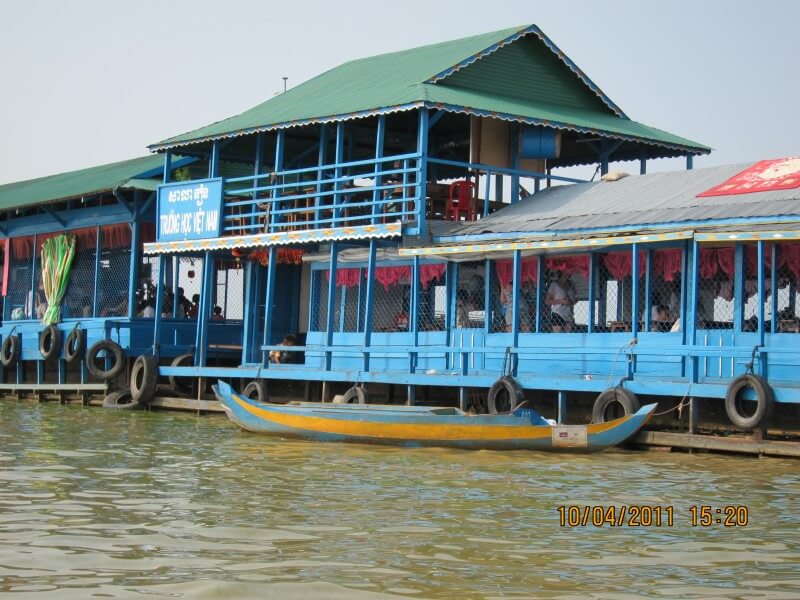 5 Days in Cambodia Beyond Unique Tours

Delice Voeung Chan will be happy to be at your disposal at any time to advise, explain or customize the trip plan especially for you.