Bhutan is one of the smallest countries

Book Bhutan Tour is licensed by the Tourism Council of Bhutan, Royal Government of Bhutan.

While Bhutan is one of the smallest countries in the world, its cultural diversity and richness are profound. As such, strong emphasis is laid on the promotion and preservation of its unique culture. By protecting and nurturing Bhutan’s living culture it is believed that it will help guard the sovereignty of the nation.

The flight into Bhutan from Kathmandu takes you over the great Himalayas, offering the scintillating scenery of the world’s highest glacial peaks Mt Everest. As you enter Paro valley, you will see the silvery Pa Chu (Paro River) meandering down the valley, the Paro Dzong (fortress) and Ta Dzong (watch tower). On arrival, received by our representative and transfer to Thimphu. Read more

Today’s full day of sightseeing In Thimphu valley includes, visit to; After Breakfast drive to Memorial Chorten; the beautiful stupa built in the memory of Bhutan’s third King. Then proceed to Buddha Dordenma is a gigantic Shakyamuni Buddha statue. The statue can house over one hundred thousand smaller Buddha statues, each of which, like the Buddha Dordenma itself, the Buddha Dordenma is sited amidst the ruins of Kuensel Phodrang. After lunch visit paintings and statues inside the monument provide a deep insight into Buddhist philosophy. Painting School; famous for traditional Thangkha paintings, Textile and Folk Heritage Museum; the fascinating testimony of the Bhutanese material culture and living traditions. In evening continue to Trashichhodzong; the beautiful fortress/monastery which houses Secretariat building, King’s Throne room and other government’s offices. It is also the summer residence of Chief Abbot. As well as witness the ceremony of national flag. Read more

After early breakfast, drive to Dochula pass (3,050m). If the weather permits, you can see a range of high Himalayan peaks towards the north east. Following peaks can be seen from this pass, on a clear day ; Masagang (7,158m), Tsendagang (6,960m), Terigang (7,060m ), Jejegangphugang (7,158 m ), Kangphugang (7,170 m ), Zongphugang (7, 060 m ), a table mountain that dominates the isolated region of Lunana – finally Gangkar puensum, the highest peak in Bhutan at 7,497m. The descent from Dochula into Punakha/Wangduephodrang valley follows winding road as the altitude difference is 1700 meters. On the way visit Chimi Lhakhang, situated on a hillock in the center of the Lobesa valley, is dedicated to Lama Drukpa Kuenley, who in the late 15th century used humor, songs and outrageous behavior to dramatize his teachings and due to this also known as ‘Divine Madman’. This temple is also known as the temple of fertility. It is widely believed that couples who do not have children and wanting one, if they pray at this temple, they are usually blessed with a child very soon. It is about 30 minute walk across field from the road to the temple or you can drive directly to temple. After lunch visit Punakha Dzong, a massive structure built at the junction of two rivers. Punakha was Bhutan’s capital until 1955, and Punakha Dzong still serves as the winter residence of the central monk body. Bhutan’s first King, Ugyen Wangchuck, was crowned here in 1907. The fortress has withstood several damages from fire, earthquake and flood over the centuries. The latest flood, in October, 1994, caused great damages to the fortress but miraculously spared its most holy statue. After Dzong visit we can walk to the longest hanging bridge of Bhutan which Helvetas built. Read more

After breakfast, drive to Paro afternoon visit to Ta Dzong, which in the past served as watchtower for Paro Dzong (Rinpung Dzong) and now houses the National Museum. Then walk down the trail to visit Rinpung Dzong, built in 1646 by Shabdrung Ngawang Namgyal , the first spiritual and temporal ruler of Bhutan, the Dzong houses the monastic body of Paro, the office of the Dzongda (district administrative head) and Thrimpon (judge) of Paro district. The approach to the Dzong is through a traditional covered bridge called Nemi Zam. A walk through the bridge, over a stone inlaid path, offers a good view of the architectural wonder of the Dzong as well as life around it. Read more

After Breakfast proceeds to Taktsang Palphug Monastery more famous as Paro Taktsang is a Buddhist temple complex which clings to a cliff, 3120 meters above the sea level on the side of the upper Paro valley, Bhutan. The Taktsang Monastery is one of the most famous touristic destinations of the country and the cultural icon of Bhutan. Visiting the Paro Taktsang Monastery is an unforgettable experience thanks to its unique location and the views of surrounding majestic mountains and emerald green valleys. It takes around 1 hour, 45 minutes to get to Taktshang walking or riding a horse. If the full hike is too tough, you can rest at the wooden teahouse restaurant or cafeteria after the first hour. The trail takes you through blue-pines to a series of three water-powered wheels. It was first built in 1692 by Gyalse Tenzin Rabgye, where Guru Rimpoche meditated in the 7th century A.D. Legend states that Guru Rimpoche flew to the site atop the back of a tigress and meditated in the cave for 3 years, 3 months, 3 days and 3 hours in order to subdue evil demons residing within it. The cave has been considered a sacred site ever since and many famous saints have travelled to meditate in it. In 1998, the Paro Taktsang was almost completely burned down - and was restored to its original form by 2005. Read more

After breakfast drive to the airport for flight to onward destination. 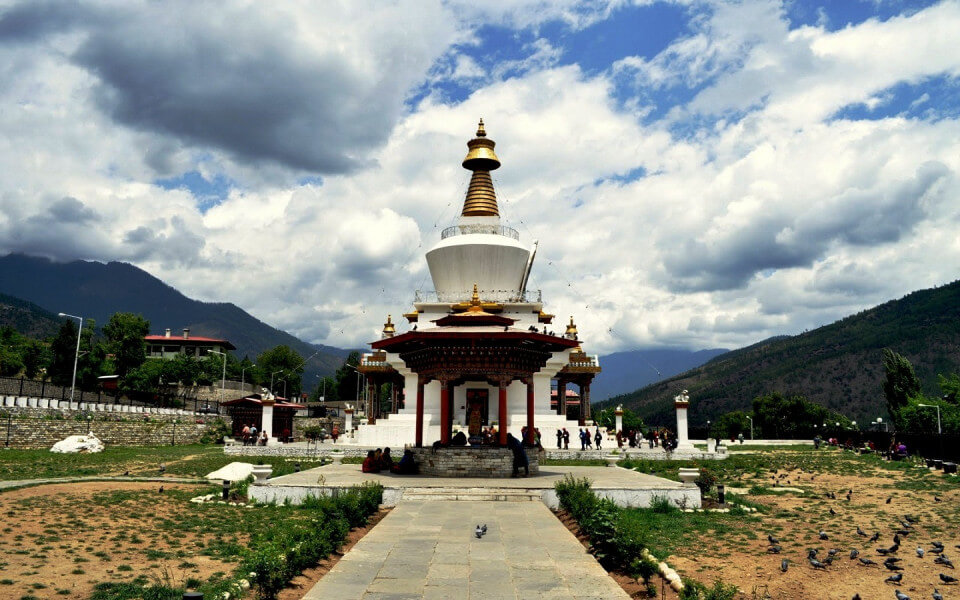 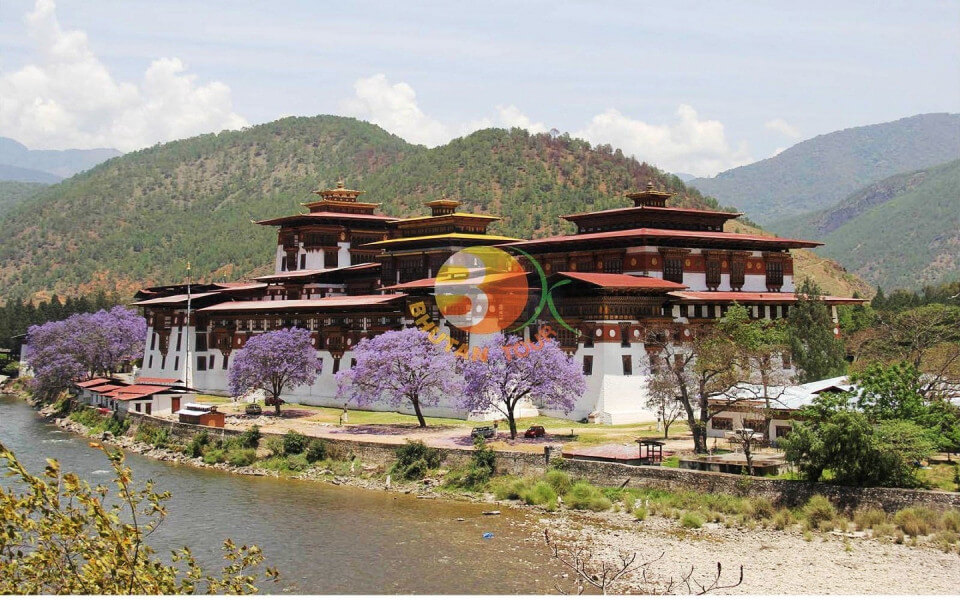 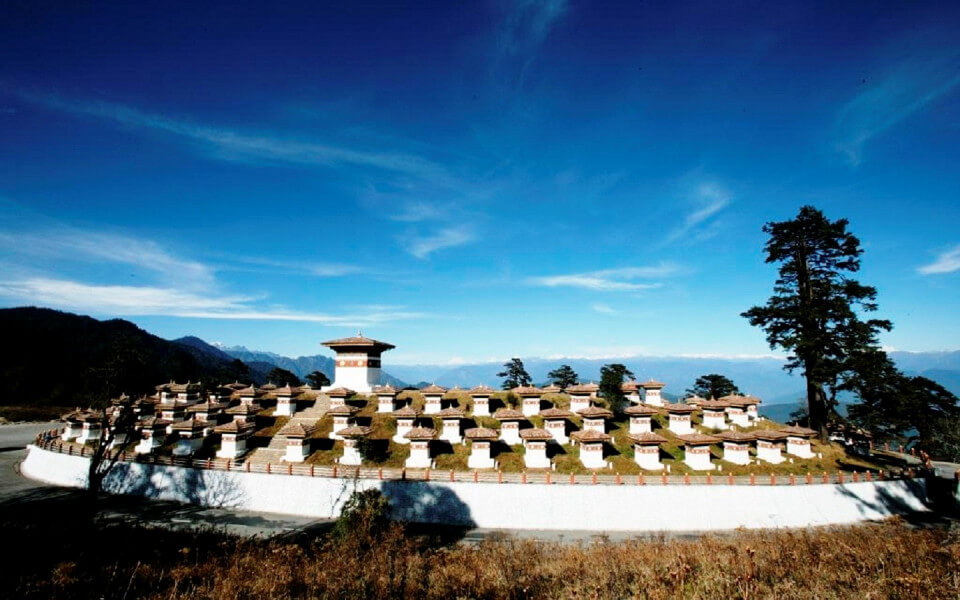 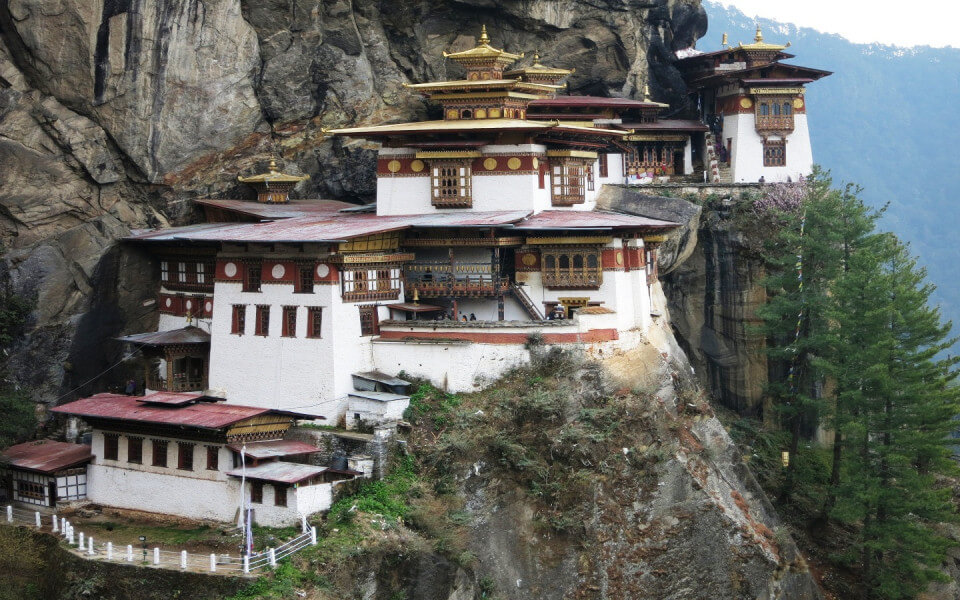 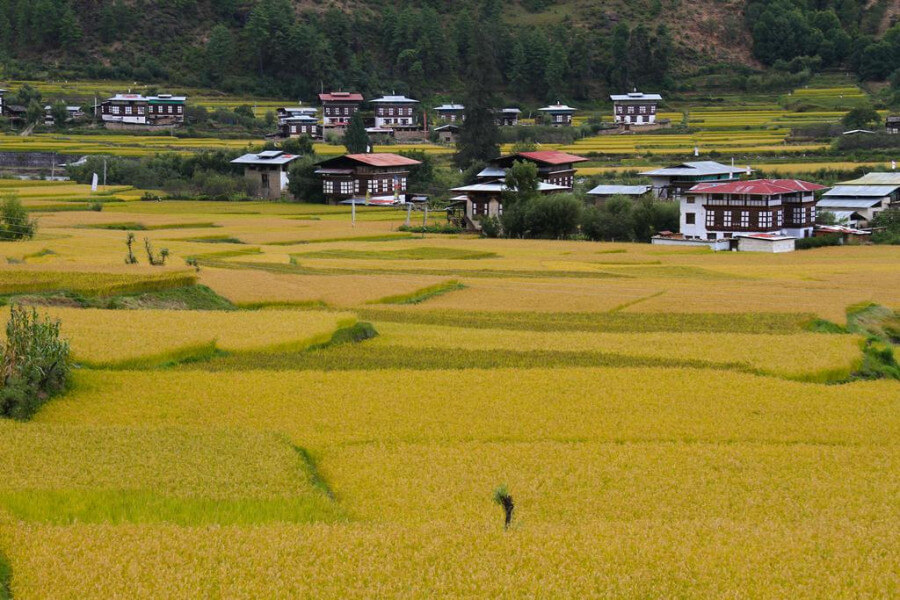 Cruising through Bhutan to Arunachal Pradesh

Glimpse of Bhutan in 5 Days

Ram Dorji Tamang will be happy to be at your disposal at any time to advise, explain or customize the trip plan especially for you.